It’s Monday, and the crypto markets are not looking good. Now, a lot of that has to do with the Coinrail hack over the weekend, but that’s not the sole reason certain virtual currencies are plunging. For instance, Ripple (XRP) has seen better days.

In this article, we will be looking at XRP’s daily chart, as well as investigating some of the news that has surfaced about the company and coin this week. 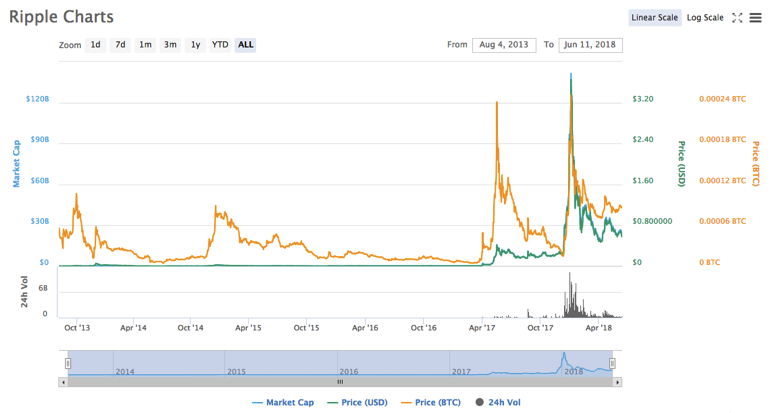 The XRP price has dropped a few cents since last week. On Friday, for example, Ripple (XRP) was selling for $0.66 at one point during the day.

Ripple News | Why is XRP Down?

As mentioned, XRP is probably suffering on the market today due to the Coinrail hack. However, Ripple is in the news for other reasons, and we cannot disregard the possibility that these announcements also played into XRP’s price drop.

So, last week, word surfaced that Ripple, the company, is facing yet another lawsuit regarding the XRP virtual currency. People seem to only be clueing into the news today, however.

Numerous reports surfaced that Vladi Zakinov has filed a lawsuit against Ripple Labs, Brad Garlinghouse, and over two dozen anonymous persons. The complaint was submitted in San Mateo County, and Zakinov claims that XRP is a security controlled by Ripple.

Not everyone was pleased with the news. The XRP community took to Twitter to discuss the matter. Some even criticized the character of the man who filed the XRP lawsuit.

The same guy who just finished a lawsuit against the provider of his pet food. That case was dismissed 22nd of March. Now he is going after Ripple. 😏 Pathetic! #xrp #xrpcommunity #ripplehttps://t.co/OGVsFJel0Z via @CoinDesk

In a recent conversation with The Korea Times, the Senior VP of Ripple talked about cryptocurrency laws. Specifically, Eric van Miltenburg stated that South Korea needs to make its laws on crypto less stringent. By having more crypto-friendly regulations, Miltenburg believes the East Asian nation will be able to benefit more from the technology.

As most of us know, the Singapore summit took place over the weekend. This summit involved the meeting of U.S. President Donald Trump and North Korean dictator Kim Jong-un. Before the meeting, it was thought that there could be an effect on XRP in the days following the two leaders meeting. So, were the people right?

At the time, no one knew whether the effect would be positive or negative. All we knew was that, within Asia, XRP is a highly popular cryptocurrency, so it was inevitable that the Singapore summit would have some sort of effect on the currencies price. And what do you know? The XRP price has dropped one day after the meeting, and the coin is deep in the red zone.

Putting the negative aside, Ripple does have some good things going for it. XRP is popular, and Ripple, the company, is constantly expanding its community and proving that it isn’t one to shy away from acting altruistic. Exactly one week ago, Ripple donated $50M to Universities across the globe.