Welcome to Day 8 of Crypto Madness!

We at cryptocurrencynews.com, CCN, are pleased to bring the fans the ICO showdown.

Check out Day 7 of Crypto Madness.

Each match-up winner will not be based on the project’s specific concept, whitepaper, or team. Instead, in the ultimate test, the winner will be decided by popular vote.

That means it’s up to you, the fans, to push your favourite ICO to the finals. Polls will be posted on our website’s Twitter page – @cryptonewsmag.

Each poll will be open for 24 hours, starting at 9 AM PDT.

Votes will be tallied after each poll closes and the winner will be announced in the next day’s post. The more exposure the specific Twitter poll receives, the greater the odds of your favourite ICO moving on – hence the power of the retweet.

For those unfamiliar with the ICOs in the day’s matchup, we will provide educational content and details of each project. That way, you still partake in the day’s poll, while learning about new and upcoming coins in the cryptocurrency market.

The competition will be single elimination, starting from March 15th with 16 teams.

The championship round will work slightly differently. On April 2nd, the final two ICOs will face off, but this time, the poll will last 48 hours. We will announce the Crypto Madness champion on the morning of the 4th.

And the winner is…

Bethereum took the lead right from the start and the fans kept it going all the way through, winning with 97% of the vote.

Bethereum will now move into the next round on March 27th, competing against TrustedHealth. 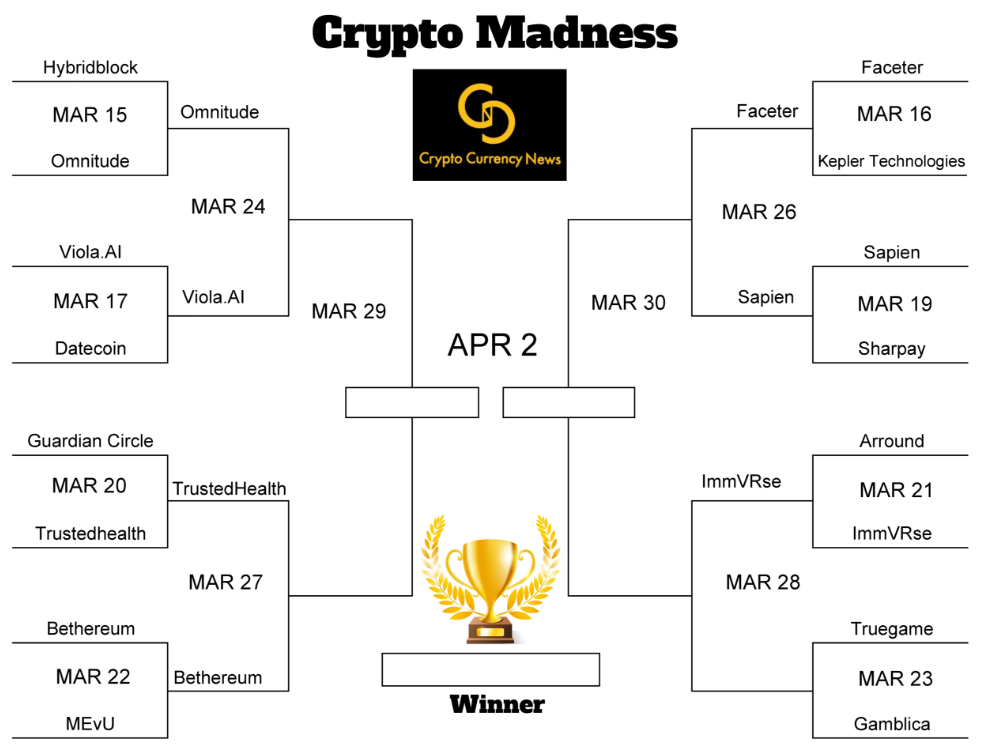 Truegame is a gambling ICO aimed at providing absolute transparency, fair chances to each player, and fair distribution of winnings. So far, Truegame has implemented scratchcards, prize draws, and lotteries on the blockchain, with more games to come later.

Another gambling ICO, Gamblica is looking to eliminate gambling fraud by allowing players to verify the platform’s algorithms. Gamblica is being developed by players for players.

This poll is now over.

Check out Day 9 of Crypto Madness